We offer a highly specialized video tape repair and cleaning service.
Video tapes we can repair include VHS, VHS-C, Betamax, 8mm, Hi8, Video8, Betamax and Camcorder tape formats.
We can also repair and restore proffessional and broadcast video tape formats.
All our video restoration and transfer procedures are undertaken in-house at our studios by true film enthusiasts.
For over 30 years we have been pleased to serve thousands of satisfied customers with our high quality personal service and competitive pricing.
Let us repair and restore your video tapes, ready for us to digitize, and preserve your precious memories for all to enjoy again. 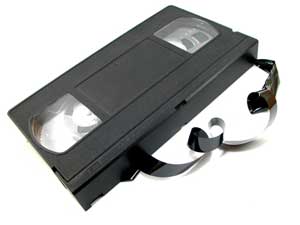 We can repair a video tape that has snapped or torn by opening the cassette and re-joining the tape with an appropriate video tape splice.
This is a delicate procedure that requires skill and patience.
Video tapes often break when a video recorder develops a fault, or due to mould growing on the tape.
We repair video tapes only in order for us to transfer and digitize them, and as such we class the repair as 'temporary' and advise against using the tape again.

We can repair a video tape that has been chewed by opening the cassette, removing the damaged section, and re-joining the tape with an appropriate video tape splice.
The removed section usually only results in the loss of only a few seconds of the recording.
Video tapes can get chewed when a video recorder develops a fault, often presenting an ejected cassette with the damaged tape dangling out of it.
We repair video tapes only in order for us to transfer and digitize them, and as such we class the repair as 'temporary' and advise against using the tape again.

This has become a common problem with video tapes in recent years.
The mould can often be seen on the tape inside the cassette, and has a white/green/yellow powdery or paste like appearance.
Attempting to play a contaminated tape can damage the video player and will almost always result in the tape tearing or snapping.
As such, a mouldy tape presented to us may also need splicing.
Video tapes diagnosed with mould contamination should be immediately quarantined to prevent spreading the growth to other tapes.
We can usually treat and repair a video tape that has mould contamination, by opening the cassette, and cleaning the tape with specialist tools and cleaners.
This is a particularly delicate procedure that demands skill, patience and experience.
Video tapes can become mouldy however stored, but in particular where tapes have been stored in less than ideal environments such as sheds, garages, lofts and attics.
We repair video tapes only in order for us to transfer and digitize them, and as such we class the repair as 'temporary' and advise against using the tape again. 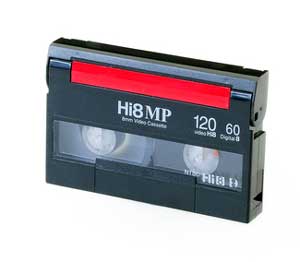 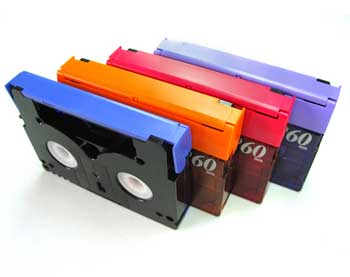 About Us
We are proud to offer you our premium video tape repair and transfer service.
With over 35 years experience of video tape restoration and conversion, our family business was born out of a passion for vintage film and tape formats, and the equipment that was used to create and play them.
We have been copying VHS and Betamax video tapes since these formats first became available in the 70's, and we were one of the first companies to offer a video to dvd transfer service as soon as recordable dvd's became available. We believe you are unlikely to find anyone who has restored and converted more video tapes than us!
Technology has moved on in leaps and bounds over the years, and we have always invested in the latest technology to ensure our customers receive the highest quality video transfer possible.
Handling and working with delicate video media demands experience, patience and care. All our video restoration and conversion procedures are carefully performed by us 'in house' at our studios.
With our commitment for providing a professional quality service, you can be assured that your priceless video tapes are in safe hands. We know you will be delighted by the results.